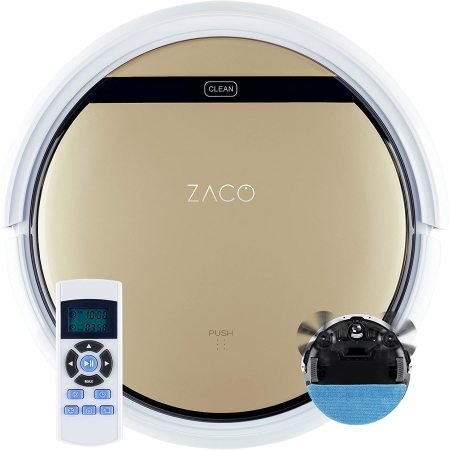 Who should buy ZACO V5sPro

Who should NOT buy ZACO V5sPro

BY:
Faith
This is our verdict of the ZACO V5sPro based on several hours of research of reviews from both experts and users.
Updated 27-12-2021

The ZACO V5s Pro is an affordable robot vacuum that can also function as a mop. However, the low price means that it lacks several advanced features such as smart mapping and an app. However, it can still deliver outstanding results compared to other robot vacuums in its price range.

It is equipped with an efficient suction power that makes it suitable for those who have wooden floors in their house because it can vacuum all the specks of dirt that are stuck in the wide gaps and cracks. Moreover, it has a low noise level, which means that you will be able to watch TV and have conversations while it is cleaning.

Unlike most robot vacuums, the ZACO V5s Pro doesn’t have a roller brush. The advantage of this is that hairs won’t get tangled up in it, which is a common problem with robot vacuums. The absence of a roller brush makes it suitable for those who have long hair or pets because they no longer clean the hairs that get stuck in the brush. However, the downside is that it won’t perform well on carpets. The roller brush provides deep cleaning because it reaches down to the roots of the carpet and picks up the dirt that is embedded there.

Aside from vacuuming, the ZACO V5s Pro also has a mopping function, unlike the ILIFE V3s Pro. It is equipped with a large 0.3 L water tank that you won’t have to refill in the middle of cleaning. However, when you use the mopping function, you have to replace the dustbin with the water tank. This means you won’t be able to vacuum and mop at the same time. Other robot vacuums, like the Eufy RoboVac G10 Hybrid, can do both simultaneously, which allows them to save time and energy.

Like other robot vacuums in this price range, the ZACO V5s is not equipped with a smart navigation system or follow a cleaning pattern. Instead, it cleans randomly by following a straight line and changing direction when it detects an obstacle. Therefore, it might clean one area several times while completely ignoring others. Therefore, it is better suited to small houses and apartments where it has a higher chance of cleaning the entire area.

You can control the ZACO V5s Pro with its remote control that allows you to set a cleaning schedule, choose between different modes, and start, pause, and manually drive the robot vacuum. The ZACO V5s Pro’s cleaning modes are spot cleaning, edge cleaning, and whole floor.

Overall, the ZACO V5s Pro is worth the price for those who live in a smaller house with wooden floors as well as those who have pets. It might lack a few advanced features but is still an excellent option for those who are on a budget.

Longer battery life (120 minutes vs. 90 minutes)
Has a mopping function
Not prone to hair tangles

My review of ZACO V5sPro 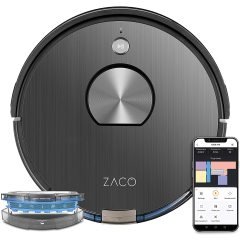 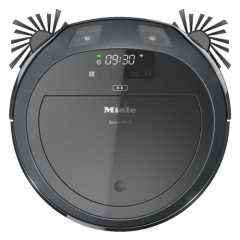 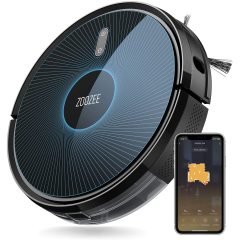 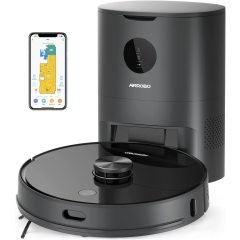